The Whitney Players Theater Company is a group of artists dedicated to bringing affordable, quality entertainment to the Hamden community while educating young actors through music, dance and drama.

The program is designed to integrate area professional actors with the youth from our community.  Our goal is to provide professional acting, dance and musical instruction while forming a company and producing a full length entertaining musical.  The goal for the young people is to learn from this experience and grow as performers. 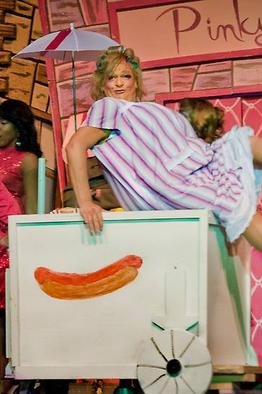 About Us & Previous Shows

With the price of theater tickets escalating our mission is to provide senior citizens and families with young children affordable entertainment within their own community.  The Whitney Players is a 501 (c)(3) non-profit organization co-sponsored by the Hamden Arts Commission.  If you would like to contribute to our organization you can mail a check to The Whitney Players, P.O. Box 185644, Hamden CT, 06518 or visit  us on givegreater.org.  All donations go directly into production costs.​

Twice a year the Whitney Players treat their audience to cabarets featuring talented vocalists, hilarious comedy and spirited dance routines.  Guests also dine on a bevy of dishes and drinks. The Whitney Players also showcases it rising stars in a "Kiddie Kabaret" each year.

The Whitney Players Theater Company offers acting workshops in the Spring and the Fall for children and teens 17 and under, as well as adults.  Classes include theater games, script work, monologues,  and improv to improve and polish students' acting abilities.  The workshops culminate in a performance of one act plays which offers all children the chance to showcase their talents.

​The Whitney Players now offer rental opportunities to other theater companies.  We have thousands of costumes and props in our inventory from several different shows (see shows mentioned above).  For info regarding rentals please contact us at​ cindysdevoe@comcast.net